An Awesome Earth Month in Garber 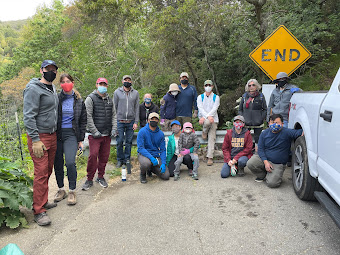 The Earth Day Volunteers - all masked up and ready to work!

Walking in Garber just became easier - and safer- thanks to the many volunteers who came to Garber for Earth Month - both the small groups who came on 3 consecutive week-ends pulling weeds and gathering them into piles to haul down to the bin provided by the City of Oakland on Earth day as well as the awesome group of 15 who showed up on Earth Day.  We split into 3 groups:  the Trail Group who repaired and replaced steps on the switchbacks near Evergreen Lane,  the crew who loaded the bin, and those who continued the important task of weeding the invasives for fire safety.   By the end of the day Saturday the bin was almost full!  Our April Clean-Up Spree Volunteers logged 117 hours!  Thanks to everyone - we couldn’t do it without you!

We look forward to seeing you soon in Garber.