The morning of June 5, 2012 was cool and brisk.  I had high hopes for our mid-week workday and as I was waiting for the arrival of our group of Japanese students (honing their English language skills in the English Language Program at UC), an early, eager banana slug tried to sign in.  We never know where our volunteers might come from.  I talked him out of it on the grounds that the meadow was too far for him to travel.  And by then, a van full of our volunteers had arrived.
The goal for the session was to begin, modestly but strategically, a long planned attempt to control the very invasive Cape Ivy infestation in our central meadow.  To do this, the tried and true method of starting with the outliers seemed appropriate, especially because the dense stands of Cape Ivy in the inner meadow were moving west and had surrounded a youthful Box Elder tree.  Liberating this lovely little tree so that it could reach the magnitude of its probable parent across the way looked do-able in one session.  We went for it.
Our volunteers split into two groups, one working on the west and one on the east of the Box Elder.  In about an hour, we had filled four large bags with pulled Cape Ivy, invasive Blackberry, some Algerian Ivy, and miscellaneous smaller invaders.  It is always surprising how much can be accomplished by a good group of dedicated workers.  In almost no time, it seemed, we had cleaned up the invasives from the neighborhood of the Box Elder. 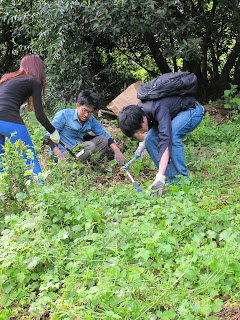 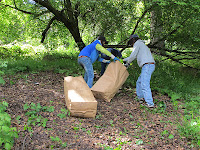 In fact, we had enough time to pack up our gloves and tools and return to the Evergreen entrance for a little English language practice.  By noon, the Box Elder had been liberated, the Banana slug had found something else to do, and Clyde and myself were thinking about the next work day, June 17!!
Thanks and Good Luck to our volunteer Japanese students!!
Posted by Garber Park Stewards at 5:04 PM