On behalf of Garber Park we are sending along this seasonal greeting with many thanks for your contributions and support, and this summary of our first year’s activities in pursuit of the restoration and preservation of the natural wildland character of Garber Park’s thirteen acres.  In December, 2009, the Stewards started out with the clear idea that these were 13 acres worth working for.  Throughout 2010, we have discovered many new dimensions of Garber Park’s value.

One year ago, hardly anyone, including near neighbors, knew that Garber Park existed.  Even as they stood at the end of Evergreen Lane looking directly into it, or driving under the overarching maples and buckeyes on the south side of Claremont Ave. east of the hotel, most people did not recognize an Oakland Open Space park.  As task number one, the Garber Park Stewards have worked to uncover and encourage the Park’s natural identity as a wildland riparian remnant of the Claremont and Temescal Canyon watershed.  We have tried to understand (and survey) the Park’s boundaries, to create a clear entrance at Evergreen Lane where there is now a sign (Thanks, Adopt a Creek folks), to improve the one mile Loop Trail for safe and pleasurable public access, to clear decades of rubbish and fuel load near the Evergreen Ln. entrance in order to establish a native watershed restoration zone, and to initiate the survey and mapping of native resources as well as numerous, threatening invasives.
The Stewards have also focused on all the wildfire issues that are inherent in East Bay upland living, with the recognition that even a shady riparian woodland can contain substantially hazardous conditions.  In keeping with the wisdom of the new earth science of restoration ecology, we know that fire safety and native restoration can and must proceed hand in hand.
Over the past year we have removed mountains of trash and weeds; we have sunlighted the creeks by removing the Himalayan blackberry thickets; we have revitalized the long term job of French broom, Spurge, and Cape ivy removal; and recently, after nine months of planning and consultation, we have accomplished the removal from the Evergreen Lane entrance of three of the Park’s 17 fire prone 120-foot eucalyptus trees. These trees rained bark and leaves year round onto the hillside and into the old Fireplace Plaza causing a heightened threat of combustion in the dry season. In recognition of the the threat these eucalyptus trees represented, the Oakland Public Works Tree Services Division said in its letter of permission:  Thank you for volunteering to remove these eucalyptus trees from Garber Park, at the end of Evergreen Lane, to improve fire safety in your area and benefit the more desirable native trees growing on the property.
The removal of the eucalyptus trees was the final step in preparing the Evergreen Lane entrance hillside for restoration, which we hope to begin in February.  Our twice a month stewardship sessions will resume on Tuesday, Jan. 4.  Our first focus will be to continue preparations for February plantings at our Restoration Site.  Other near-term goals for 2011 include our ongoing removal of invasive species, especially French broom, Cape ivy, Himalayan blackberry, and spurge.  We are working with the City of Oakland Wildfire Prevention Assessment District (WPAD) to secure a project for Garber Park that will reduce the risk in the fire vulnerable areas while protecting native plant restoration, a project that will maintain lower fuels and a safer park.
We invite your support and participation.
See you soon,
The Garber Park Stewards 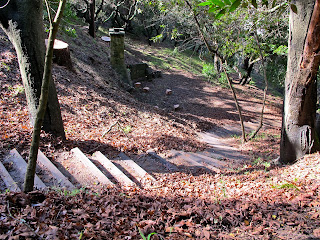