New Stairs for the New Year 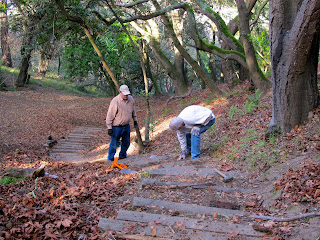 We devoted today's workday to cleaning up the Evergreen Lane Entrance.  Our new plants, with the assistance of "rain" from some sprinklers, are flourishing.  But, the big news is that NEW STAIRS now make walking to Fireplace Plaza a lot safer.   Bob and Ed replaced 8 crumbling steps.  The rest of us weeded, pulled erhardta grass, and cleared the trail.  Please join us at our next workday on Saturday, January 21, where we will continue weeding the Evergreen Ln. entrance,  and begin a seek and destroy campaign against Cape ivy and French broom sprouts.  In the meantime, come and enjoy the new stairs and native planting at the Evergreen Lane entrance.
Posted by Garber Park Stewards at 7:56 PM

It is with much sadness that I write this post.  Recently, a most wonderful, happy, playful young dog died from eating poisonous mushrooms in Garber Park.  I put up signs at the entrances to Garber warning people to be careful when walking their dogs during mushroom season – it is wise to keep your dog leashed during the mushroom season.
Just how common is it for dogs to eat mushrooms?  Responses from people and a google search suggested it is not uncommon.  A few years ago a neighbor’s puppy died from eating mushrooms in her yard.  A local veterinarian suggested that it was common enough that he felt all wildland parks should post signs warning of the danger.  Printed below (originally published in the Monterey Herald, by Karen Ravn) is one of the best articles I found warning that:
DOGS AND MUSHROOMS DON’T MIX.
She was a big, beautiful, healthy German shepherd. But last weekend, without warning, she got terribly sick. He was a small, adorable, healthy Chihuahua. But nearly two weeks ago, without warning, he got terribly sick, too.
In both cases, it was something they ate: mushrooms.
That was the conclusion of the veterinarians who saw the dogs, and it's not a rare diagnosis. "We see one every three months or so," said Jeff Hogans, a veterinarian at the Harden Ranch Veterinary.
But many dogs that get sick from eating mushrooms are probably never seen by veterinarians, said Pat Davis, the veterinarian who handled the Chihuahua's case at the Harden Ranch hospital and was on duty Wednesday at the Monterey Peninsula-Salinas Veterinary Emergency Clinic. "They can end up dying, and the owners never realize what happened."
Neither the Chihuahua's owners nor the shepherd's realized what had happened at first. Neither of them saw their dogs eat mushrooms. But the Chihuahua's owners did see him throw up pieces of mushroom. The Chihuahua's owners were able to get to the hospital in time, and the dog seems to have made a complete recovery.
The shepherd's owners took her to the veterinarian, but they were too late. She died in the car on the way. The owners had an autopsy done to find out what was wrong, and that's how they found out about the mushrooms.
It's never a good idea for dogs to eat raw wild mushrooms any more than it is for people. Some dogs, especially young ones, will eat just about anything.
Dog owners are advised to dig up every mushroom that pops up in their yards -- without mushing them, because that only spreads the spores that will grow more mushrooms.
"Some of the Amanita species especially can be a problem for them," said Lisa Hoefler, director of operations at the Monterey County SPCA. Amanita phalloides, known as the death cap, is the most poisonous mushroom for people.
Cats are at the same risk from mushrooms as dogs, Davis said. Except for one thing: Cats tend to be a lot more finicky about their food.
Posted by Garber Park Stewards at 6:34 PM