Although in July in Garber Park we are as likely to see the berry as the flower, we wanted to call attention in mid-summer to one of the delightful berry blossoms that may be found in the wetlands on the lower portion of the loop trail.  Thimblerry (Rubus parviflorus) occurs in many spots in the East Bay ridge lands, but has not been reported elsewhere in the bay counties.  Garber Park's Thimbleberries are dense thickets where the ground is seeping water from the springs upslope. Some commentators suggest that the first habitat in which to expect Thimbleberries is a Coast Redwood Forest, especially Muir Woods, but it seems that many riparian wetlands attract them.

Thimbleberry is a good shrub for wildlife providing cover in thickets and food for birds and mammals.  The flower provides nectar for hummingbirds.

And, for those Ethnobotany fans indigenous cultures had many uses for Thimbleberry, from making soap to lining baskets,  and even as a remedy to bring down swelling.  For more on the Thimbleberry and its many uses click here.

Next time you walk the entire loop, look for Thimbleberry.  When you find it you will be looking back in time and forward across the ridges of the East Bay.
Posted by Garber Park Stewards at 3:59 PM 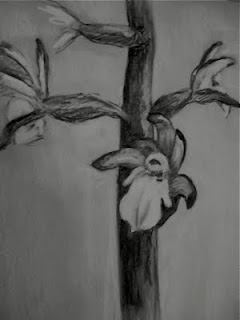 Last year about this time as we were pulling French Broom from the sunny slope above the Evergreen Lane entrance a runner dashed by and asked if we had seen the orchid.  Of course we had missed it on the way up, but on our return we found it close to the trail at one of the steep upgrades.  It was about ten inches high, a thin pinkish stalk with many blossoms at the end of seed vessels that were just forming.  Our May 5, 2010 photograph shows a robust plant standing alone except for the tendril of a native cucumber nearby.
The discovery of a native orchid anywhere in the East Bay ridge lands is important and Garber's orchid brought forth a flurry of attention and botanic consideration.  Consensus said that we had come upon corallorhiza maculata --Spotted Coralroot--though our orchid had no spots.  Together with coralroot discoveries in Tilden and Joaquin Miller, Garber's orchid apparently brings up different taxonomic views and it is possible that there is as yet no settled opinion on the exact taxonomy here.
Because we knew where to look we were able to catch the return of our coralroot (a perennial) in 2011.  We expected the long and moist spring to have produced an even more lavish plant than the 2010 orchid.  Photos show the emergence of a much smaller plant with far fewer blossoms and seed vessels.  By mid-May, some desiccation was also visible.  On July 4 we noticed that only the stalk remained, the entire reproductive cycle apparently having been completed.
So far, we have not located any other coralroots on the hillside or indeed in Garber Park as a whole.  The characteristics of these plants are not well understood, but the appearance of even one in Garber  is testimony to the native botanic richness of the park. 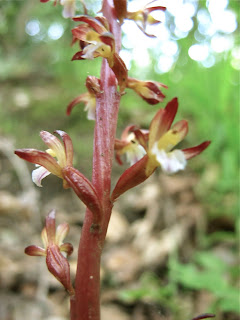 We will keep you posted as to further discoveries and hope that if you come upon this rare native, you will let us know in time to photograph it and add it to our gallery of documentation.
Posted by Garber Park Stewards at 6:11 PM

July in Garber Park has seen a flurry of restoration activity.  Along the Loop Trail volunteers cut back vegetation, removed eucalyptus and broom sprouts.  At Bob's Place our dedicated Blackberry Eradication crew continued to remove Himalayan blackberry rootballs and re-sprouts and haul away the dead cane.
Because of their success at rolling back the years of neglect and the invasion of blackberries the native riparian habitat is returning -  Snowberry, thimbleberry, willows, and ferns are now able to once again flourish.  Bob's Place is now Restoration Site #2.

Back at Restoration Site 1 at the Evergreen Ln. Entrance weeding and monitoring the planting beds on the hillside continue.  Planted in February it is especially satisfying to see all these plants flourishing, most with seeds to be scattered across the hillside to fill in the empty spaces.

However,  it's the unearthing of a stone patio in front of Fireplace Plaza that has created the most excitement.  We receive suggestions almost daily about how wonderful it would be to refurbish the fireplace, the plaza, and research the history.  Bob has read through the archives of the Oakland Tribune and discovered that the fireplace that we thought was built during the WPA-era is actually much older, and was built in the early 1920's.  Nancy Mueller and others are actively engaged in ways to enhance the aesthetics of the ugly screen that was put over the fireplace last year after two fires were started there.  Still others are discussing ways to refurbish the fireplace itself.  We now have Restoration Site #3.  Do come to the Evergreen Lane entrance, walk down the stairs to Fireplace Plaza and contact us at garberparkstewards@gmail.com with your suggestions.  We need your help to make this project a reality.
Posted by Garber Park Stewards at 11:39 AM