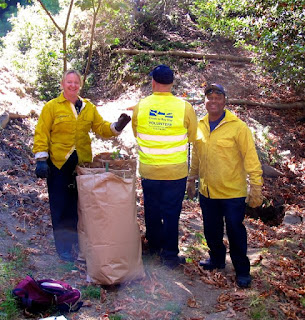 CREEK TO BAY DAY in Garber Park this year was great!   Under the guidance of Lech Naumovich, Director of the Golden Hour Restoration Institute and valued advisor to Garber Park's several restoration sites, we were able to emphasize and explore the Park's watershed areas and to consider future conservation for this critical wildland feature.  The closer we look at the water in Garber, the clearer its formative role becomes.  But this third annual Creek to Bay Day event in Garber also allowed us to assess larger changes that may be in progress and also the rate and quality of success in our various restoration areas.

WITH A DIVERSE GROUP OF VOLUNTEERS, which at one point included a cohort from Fire Station 7, we walked the Loop Trail in reverse, starting at "Fireplace Plaza"  heading for the creekside restoration area where Measure DD improvements had been carried out.  At creekside, we split up to pull invasives--poison hemlock, re-emerging Himalayan blackberries, Erhardta grass, Cape Ivy--and managed in about an hour to produce more than a dozen tall bags of weeds. On the expanded banks of the creek, to augment the Measure DD plantings in the creek itself,  the Stewards hope to carry out a major restoration planting this winter and spring when the ground is wet and workable.

AT THE CREEK we noticed many changes from our first visits three years ago when the entire area was buried under overarching stands of Himalayan blackberries.  Thanks to the "Berry Bashing" contingent of the Stewards the invasive blackberries are gone (a three-year project). And, thanks to Oakland's Measure DD, native and indigenous willows, ash, ferns, and equitsetum (horsetails) have been planted, and the banks are fortified against erosion. Thanks also to the recent WPAD wildfire abatement efforts, large nearby stands of native snowberry, thimbleberry, gooseberry, and ferns have been daylighted.  But perhaps the most interesting and unexpected change is the emergence of hundreds of Oregon Ash seedlings. Some of these native trees are in their second or third year and seem to have withstood deer nibbling.

OUR "PERCHED" OR MIDLAND MEADOW was the secondary destination of Lech's workshop. With a riot of invasive weeds and wetland natives, this large area of seeps and springs--the source of the lower creek--is inappropriate for direct restoration at this time.  Though it is ringed by an upper wall of native willows, the latent native biota is hard to assess and Lech suggested a small experimental area where all foliage would be removed for a period long enough to see what might be in the native seedbed.  We look forward to working with the City of Oakland and Lech for a planting plan that will best advance the unique habitat of this wetlands area of Garber.

THE MEADOW AND ITS CHALLENGES point the way for Garber's future.  The rich diversity and unique beauties of Garber Park are first and foremost the handmaidens of its waterways.   Garber Park IS a watershed and all stewardship relating to its welfare should be informed by that central fact.  It seems like long ago that the Garber Park Stewards recognized that the 13 acres of the park were "worth working for" but the elements and dimensions of that value  remained to be discovered. With friends old and new,  this Creek to Bay Day gave us the opportunity to look deeper, to consider time and perceive change, to notice the interplay of the larger and the smaller elements of Garber's particular environment..

THANKS TO ALL THE VOLUNTEERS who helped make this such a fun Creek to Bay Day.  And special thanks to Lech for leading the tour and opening our eyes.